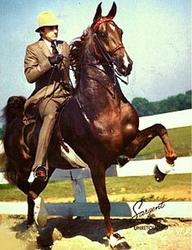 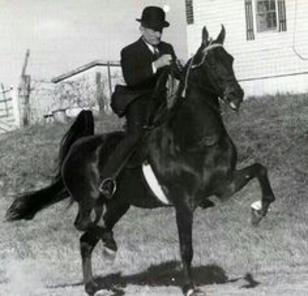 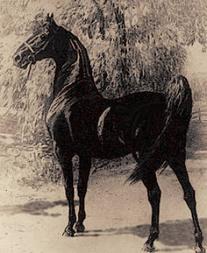 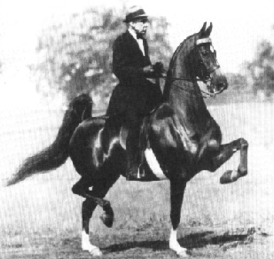 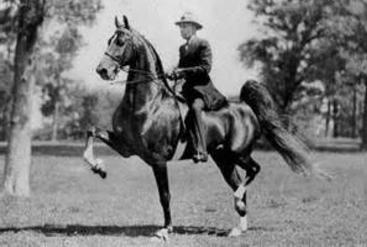 Those times the family would gather on Sundays and go into town for Church with their best horses, which were usually Saddlebreds.  As time went on, competitions would break out in town on Sundays and the horse show was born!

In the show ring, American Saddlebreds compete in six divisions:  Five Gaited, Three Gaited, Fine Harness, Park, Pleasure and Western.  Each division has its own look and desired traits; however, they all strive to meet the model of an ideal American Saddlebred.  All divisions of competition are judged on performance, manners, quality, and conformation.

The five gaited horses are typically the headliners of the show ring.  In addition to the conventional gaits, the walk, trot and canter, the five gaited horse is unusual because it has the capacity to learn two additional gaits - the Slow Gait and the Rack.  The slow-gait and the rack both "man-made" gaits. When the horse slow gaits, each foot hits the ground separately in a very controlled and collected fashion. The rack is much faster than the slow gait. The rack is so animated and exciting to watch that you would never believe it is perfectly smooth to ride.  Watch the rider as she racks her horse and you will see that she may bump side to side in rhythm with the horse’s hips, but she does not bounce up and down at all. The way a rider asks the horse to rack is to spread their hands apart and gently sea-saw the bit back and forth in the horse’s mouth.

Horses competing in the three gaited division are the epitome of beauty, brilliance, elegance, refinement and expression.  The horses perform the walk, park trot and canter in an animated and precise manner.  To accentuate the refinement of the horses in this division, they are shown with a roached mane (a shaved mane) and high set tail.

The pleasure division has been broken into two sections-Show Pleasure and Country Pleasure.  All horses competing in the pleasure division conform to the typical Saddlebred type.  Manners are emphasized in this division and all horses must perform a true flat walk, an animated show trot and a pleasurable canter.

Horses in the Country Western pleasure division demonstrate the traditional western gaits-flat walk, jog and lope.  Western tack and western attire is required for this division.

The hunter division of the American Saddlebred further showcases the versatility of the breed.  The hunter must give the distinct appearance of being a pleasure to ride and display a pleasurable and relaxed attitude.  Horses may be shown with a braided mane and tail. They are shown at the flat footed walk, trot, extended trot, canter and hand gallop.